Over One Quarter of Nursing Home Abuse Cases Not Reported to Police, Says Department of Health and Human Services

An ongoing investigation by the Office of Inspector General in the Department of Health and Human Services has released an alert to the Centers for Medicare and Medicaid Services (CMS) that more needs to be done to identify cases of abuse. While the full report from the investigation won’t be completed for another year, deep concern over the preliminary results prompted the Inspector General’s office to issue the alert. 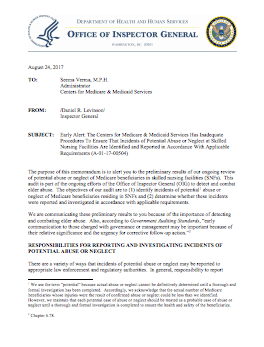 In 2011, federal laws were strengthened. Since then, Skilled Nursing Facilities that care for Medicare and Medicaid patients are required to report suspected abuse to local law enforcement. Failure to do so is punishable by fines of up to $300,000. The investigation’s preliminary findings have revealed that more than one quarter (28%) of abuse cases discovered in preliminary audits were not reported to police by the care facility.

In one case uncovered by the audit and reported in the alert, there is evidence that a care facility cleaned a victim of sexual abuse to remove evidence and made other attempts to cover up the crime. The family of the victim was notified the next day and it was the family who contacted law enforcement. In another incident described in the alert, a patient was admitted to the emergency room with bruises and evidence of beating. The hospital reported the complaint to local police.

Curtis Roy, an assistant regional inspector general in the Department of Health and Human Services, was interviewed by NPR for this article in which he says, “There’s never an excuse to allow somebody to suffer this kind of torment.” Roy and his team have found 134 cases of abuse of nursing home residents in 2015 and 2016 that sent the patient to the emergency room. Most of these involved sexual assaults. Investigators reported all 134 cases to the police. “We’re so concerned [that] we’d rather over-report something than not have it reported,” said Roy.

While the Inspector General’s alert acknowledges that it does not yet know if these preliminary incidents resulted in fines or punishments, Curtis Roy says the cases they did find are likely a small fraction of the ones that exist. The alert urges immediate corrective action of the CMS.